skip to main | skip to sidebar

More Than 1,000 Snakes and Rare Turtles Seized at Airport 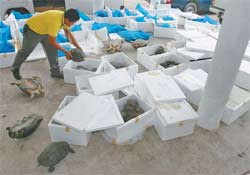 Article from The Bangkok Post
Turtle photo by Tim McCormack
Two wildlife smugglers were arrested at Suvarnabhumi airport Monday as police intercepted an illegal shipment of more than 1,000 snakes and turtles. Police said it was the biggest wildlife seizure this year. They received an anonymous tip-off yesterday morning that smugglers would be sending the shipment through the airport's cargo section. "We immediately contacted customs officers and asked them to carefully monitor shipments being sent to China, Taiwan and Vietnam," said Pol Col Subsak Chavalviwat, senior liaison officer with the Asean Wildlife Enforcement Network [pdf] (Asean-Wen) Programme Coordination Unit.

Two men arrived at the airport in separate pick-up trucks, parked the vehicles in the cargo area and began unloading 180 foam boxes for shipment. Within minutes, police arrived and examined the cargo. "They told us that the boxes contained fish and mantis shrimps, but fish and shrimps were found in only 62 of them. The rest of the boxes were full of turtles and snakes," Pol Col Subsak said. "There were 379 turtles and 660 snakes, altogether weighing 555 kilogrammes." 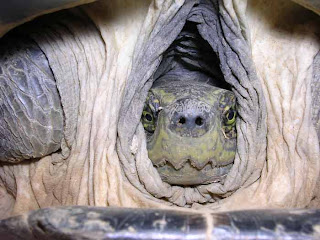 The animals recovered were rat snakes, Malayan box turtles, yellow-headed temple turtles and snail-eating turtles. The three turtle species are protected. The suspects were charged with possessing wildlife without a permit and attempting to illegally export wildlife. Under the Wildlife Act, they could face up to four years imprisonment and/or a 40,000 baht fine.

A source at the Department of National Parks, Wildlife and Plant Conservation said the shipment was due to be sent to China on Cathay Pacific Airlines. He rejected a claim by the two suspects the animals were raised in a breeding farm. "On the contrary, we are certain that they are from the wild," he said. The official said the shipment was the work of professionals, who had placed cold bottled water wrapped in newspapers in each box to keep it cool. "Turtles are resilient and they had a higher chance of survival, but snakes are highly vulnerable and too many had been crammed together with little oxygen. Many were found dead," said the source. The surviving animals will be cared for by wildlife breeding centres until the completion of legal proceedings.
5 comments:

Baby Crocodiles Talk to Each Other in Their Eggs 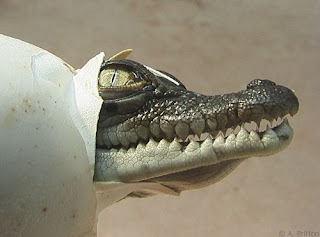 Article from The UK Telegraph
Baby crocodiles "talk" to their mothers and their unborn siblings even before they hatch, perhaps indicating that they are ready to leave the egg, according to new research.

French scientists Amelie Vergne and Nicolas Mathevon of Universite Jean Monnet in Saint-Etienne noticed that the young reptiles make a noise, described as sounding like "umph, umph", in the moments immediately before they hatch. The researchers tested ten batches of crocodile eggs, dividing them in to three groups. One was played actual recordings of the juveniles' pre-hatching calls, one was played random noises, and one was left in silence. Eggs played the real recordings all hatched within ten minutes, while the other two groups stayed in their shells for another five hours at least.

Similarly, the mothers responded to the real calls. Without their knowing, the scientists dug up the eggs and put them in an incubator, replacing them with speakers. Mothers played the real sounds attempted to dig up the eggs, while those who heard random sounds did not. Writing in the journal Current Biology, Mathevon said many baby reptiles are eaten right after birth, so it may be important for them all to hatch together and for the mother to be there when they do. "In this sense, it is important for all embryos in the nest to be ready for hatching at the same time so that they all receive adult care and protection," he said in a statement.
No comments: 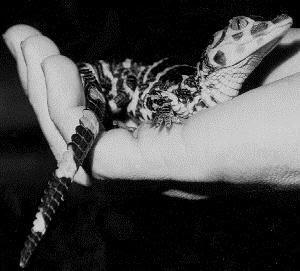 Article from xinhuanet.com
Fishermen in the eastern province of Anhui have found a wild Chinese alligator, which is being called a living fossil, and tracks of another, local authorities said on Monday. The 20-kilogram reptile was discovered last week in a pond in Wanshou Village, Wuhu County while villagers were fishing. It was believed to have been living in the village for more than 40 years, said experts with the national nature reserve for the Chinese alligators. The alligator was released to the pond after an investigation, experts said.

Villagers also saw what appeared to be the tracks of another, larger specimen in neighboring Gangshan Village, said Hong Ning, Wuhu Forestry Administration director. In Wuhu, once a major habitat of the reptile, not one animal has been sighted for nearly 30 years due to human activities, he said. The Chinese alligator, also known as the Yangtze alligator, was very plentiful, particularly on the eastern seaboard. But now, with a population of no more than 150 in the wild, it is listed one of the world's most endangered creatures.

China has put the Chinese alligator at the top level of its protection list. In 1979, the Chinese Alligator Breeding Research Center was set up in Anhui. Since then, the number of alligators at the center has risen from about 200 to more than 10,000.
No comments:

Man Sues After 60+ of His Snakes Died in State Custody 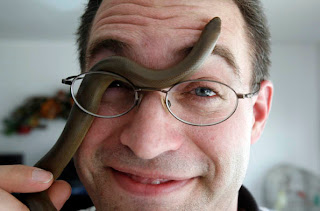 Article from The Salt Lake Tribune
A Utah man convicted of importing snakes without a permit says authorities let 62 of his rubber boas die in state custody. Only three others survived.

Ryan Hoyer is suing the Division of Wildlife Resources for failing to take care of his snakes. He says they are picky eaters, sensitive to temperature changes and need to bathe constantly in water. ''If these snakes had simply been provided water and shelter for a year, the vast majority would have been fine. Instead, within eight or nine months, half were dead,'' Hoyer said. ''It is easy to overheat reptiles.''

"Suppose that your property was stolen by a thief ... then the state seized it and held it as evidence for trial, then destroyed it due to negligence. ... Regardless of whether that's jewelry, cash, rare paintings, family heirlooms, musical instruments, snakes, whatever -- (the state) is saying 'We don't owe you any duty of care for your property.' " It's precisely that legal concept that sunk Hoyer's civil suit at the district level, attorney Stephen Spencer admits. The courts have found that a state agency is usually immune from negligence suits if the damaged property in question was taken as a part of a judicial action like a search warrant.

Hoyer and Spencer have appealed that decision, hoping to convince the courts that this type of situation should be viewed differently.

The wildlife division referred all questions to Attorney General Mark Shurtleff's Office, which says citizens can't sue government for ordinary negligence. Assistant Attorney General Matthew Bates confirmed Sunday that about 60 of the snakes died in state captivity over the years. He said they were difficult to care for. Bates wanted millions of dollars for the research value of the dead snakes, rejecting the state's offer of paying street value, Bates said. The state eventually got the lawsuit dismissed, but Bates is appealing to the Utah Supreme Court.
No comments: 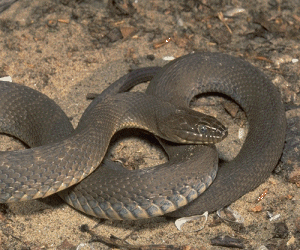 Article from AP
The nonpoisonous Lake Erie water snake — deemed endangered by the state and threatened by the federal government almost a decade ago — has rebounded in recent years, and biologists predict that it will soon be removed from the lists.

The water snake [Nerodia sipedon insularum] once inhabited 22 islands and rock outcrops of western Lake Erie, part of the Ontario mainland and shorelines of Ohio's Catawba/Marblehead peninsula. But the species fell victim to development and, more specifically, hogs, which were brought to the islands in the early 20th century to kill the snakes. As vacationers crowded the resort communities on South Bass, Middle Bass and Kelleys islands each summer, more of the snakes — which are known to bite — were eliminated. Just 1,200 adult water snakes were left about 20 years ago, Northern Illinois University researcher Richard King said.

Now there are about 12,000. The U.S. Fish and Wildlife Service is reviewing the snake's status. The service declared the snake threatened in 1999, meaning it was in danger of extinction in some areas. The listing made it illegal to kill or harm the snakes or destroy their habitats. The Ohio Department of Natural Resources designated the water snake as an endangered species in 2000. It also received legally protected status in Canada by Ontario's provincial Endangered Species Act. In Ohio, the snakes have benefited from several hundred acres of protected habitat. Additionally, islanders have been told they can't build docks or breakwalls with sheet metal at water level. Property owners have been building docks from wire mesh, wood and rock, which make it easier for snakes to pass through and nest.
No comments:

Tortoise Comes Out of His Shell 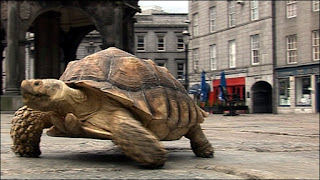 Article & photo from BBC News
A tortoise has come out of his shell to become a confident street walker, BBC Scotland can reveal. Stormin' Norman is a 10-year-old African sulcata tortoise who is turning heads by wandering through the streets of Aberdeen. Owner Dianne Melville - who runs a reptile shop - walks with him, but she said Stormin' Norman decides his route. He goes out several times a day, and is photographed by bemused locals and tourists who see him.

'No fear'
Ms Melville said: "Stormin' Norman is non-stop, a Nomad, he would walk the streets all day if he could. He has no fear of anyone or anything, people have to move out the way, he has no manners - that's why he's called Stormin' Norman. He is always supervised but he decided where he wants to go." She added: "There has been a lot of interest in Stormin' Norman." It is expected the tortoise will have to be found a new home when he gets larger. John Carle, of the Scottish SPCA, said there was nothing wrong with Stormin' Norman or what he was doing, but added they did not want to encourage copycat actions among owners of exotic pets.
No comments: 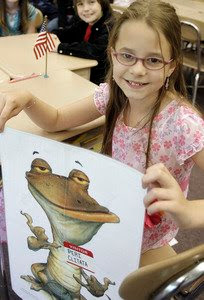 Article from BusinessWire.com
Photo from Philly.com
After its discovery by Dr. Aaron Bauer on the South Pacific island of New Caledonia, a new gecko species remained nameless, until now. New Jersey fourth grader, Gemma Farquhar (pictured at right) has given the once nameless species of gecko an identity. As the grand prize winner of the nationwide contest, Project Gecko presented by Zilla, Farquhar’s name Bavayia periclitata will be given to the new species. “Bavayia periclitata was chosen for its accurate and artistic description. Gemma was able to combine scientific language with creative intellect forming a name that depicts the importance of taking care of the animals that share our world with us,” said Dr. Aaron Bauer, Villanova professor of biology.

In her contest submission, Farquhar, a student at Oaklyn Elementary School in Oaklyn, NJ, dared to be different and strayed away from using typical Latin names that describe the gecko’s habitat or physical features. Bavayia periclitata means “endangered” in Latin. Farquhar says she chose this name to help emphasize the importance of taking care of geckos, other endangered species as well as our environment in general. “I chose this name because it means endangered and it will make people think about how our geckos are disappearing and are on the endangered list. I hope people will try harder to protect our geckos,” said Farquhar. “Winning Project Gecko means a lot to me because I named a whole new species of gecko for eternity and giving the gecko this name may mean there’s a better chance to help other species.”

The contest organizers Zilla, manufacturer of reptile products, believe Farquhar’s name is perfect for the new species. “We were thrilled to read about why Gemma chose this name for the gecko,” said Daniel Lorica, Zilla brand manager. “She recognizes that we all have a responsibility to preserve the endangered species of animals with whom we share our world. And her appreciation for the environment is what made her entry stand out from the others.”
No comments: